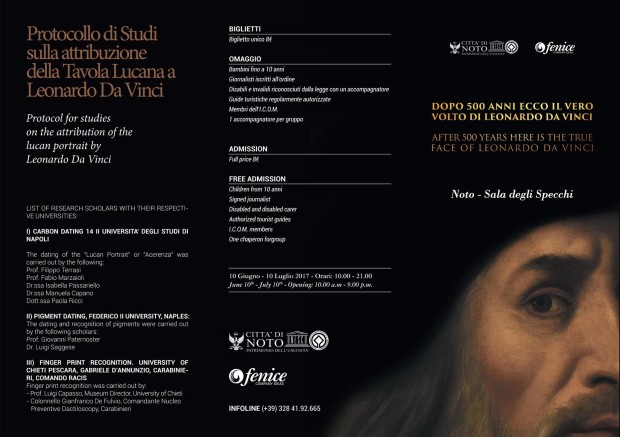 The portrait of Leonardo da Vinci was discovered by Nicola Barbatelli in a private collection in Salerno in December 2008. The work was sent for scientific analysis, in order to discover both age and provenance, to the laboratories of the CNR at the University of Federico II in Naples, and CIRCE and INNOVA where it was revealed to date back to the end of the fifteenth or beginning of the sixteenth century. Sources traced its original movements from Milan to Florence and subsequently to Naples where it was recorded in the Ruffo di Baranello family collection.

The Lucan Portrait was investigated by the Carabinieri department of Preventive Dactyloscopy and by the University of Chieti which, as well as morphological research, carried out a special investigation into finger print recognition. This research led to the discovery of three prints, one of which is compatible with Da Vinci’s only known finger print, taken from the shading in the grains of ebony in the necklace of the Lady with an Ermine, Leonardo’s masterpiece now in Kracov.

The most interesting factor regarding the portrait is certainly the problem of Leonardo’s physical features that, despite historical indications, are still an enigma. Five centuries on, this portrait has finally given us the face of the genius that is quite unlike that of the famous portrait as an old man in the Royal Library in Turin.

The villa is surrounded by a beautiful garden, it is in the center of the Lido di Noto but in a quie
€
For night